It’s almost become a tradition! The annual trip up to Birmingham to see Motorcycle Live. Once again, there was so much to see and once again so much stuff I missed. Now, I won’t bore you with the details of my bacon roll and terrible coffee, but here are my top five highlights of this years Motorcycle Live 2019.

Earlier this year I did a piece on call “Only Super heroes Ride Harleys“. In that piece I mentioned Black Widow’s LiveWire motorcycle, which was first on the big screen in 2015. Well, now it’s here in real life and boy was it popular. Every time I went to take a look, there were dozens of people surrounding it. There is also a rolling road with a LiveWire for people to have a go, but get there early if you want to beat the queues.

Once again, CCM were showing off their latest spitfire models and just like last year they brought with them an actual spitfire! I surprisingly, liked the new bobber model, I don’t usually like bike without the back fender missing, but this one looked great.

Last year, one of my highlights was seeing the Norton Commando 961 Street, created by Henry Cole and Guy Willison from ITV’s, the Motorbike show. This year, I got to meet Guy as his discussed his latest, solo effort. The Honda CB1100RS – 5Four. It’s retro styling looks fantastic. But it’s a limited run as only 54 are being made. So if you want one, you best get a shift on. 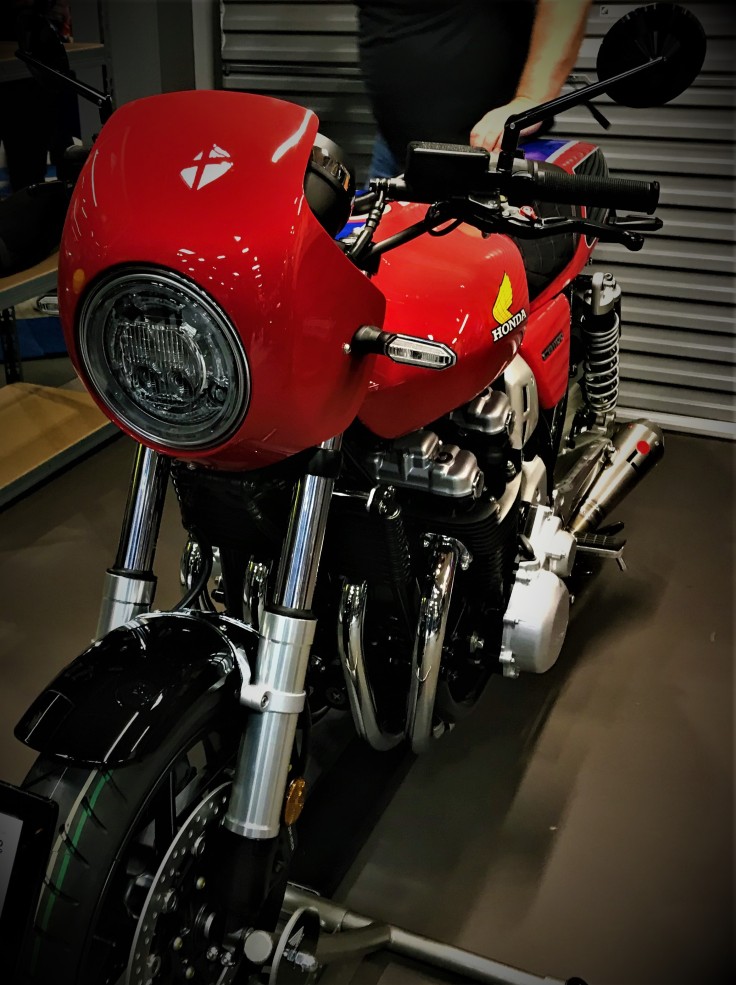 This is a new one for me. As you know, I’m really all about the vintage when it comes to motorcycles. So when I saw the moto cirque advertised last year I thought I’d give it a miss. However, this year, curiosity got the better of me and I went and had a look. If you haven’t heard of it, it’s basically a motocross stunt show. Six of the countries best riders take it in turns, jumping off ramps and doing tricks in the air. Worth a look, even if it’s just to see something a little different on two wheels.

For me, it’s the highlight of every Motorcycle Live so far. Every year the national motorcycle museum bring a dozen or so classic bikes from their museum just down the road. They always bring some amazing machines and this year was no exception. They also do live start ups of some of the older bikes. This year was this Vincent Black Lightening 1949.

Another highlight from those guys is the live restoration that they carry out throughout the duration on the event. This photo was taken on the first day, so a long way to go!

I also had a few mini personal highlights, like seeing the UK’s strongest man point at some scooters or nearly walking into Carl Fogerty. I, as usual, also missed a whole bunch of stuff including the mcia TryRIDE – which is the new name for “get on” which you’ll remember from last years post is the company that give, non-riders the opportunity to have a go at riding for the first time.

Still, I had a great time and will be attending again next year as it is a tradition now!

Thanks for reading folks. I’ve got a couple more post coming up before the end of the year, including my Traditional Christmas Yule Blog. Speaking of which, over on Instagram, i’m doing a Two Wheeled Advent to countdown the days until the 25th, so join me there for a bit of festive fun!

Words and Pictures by Craig Willis